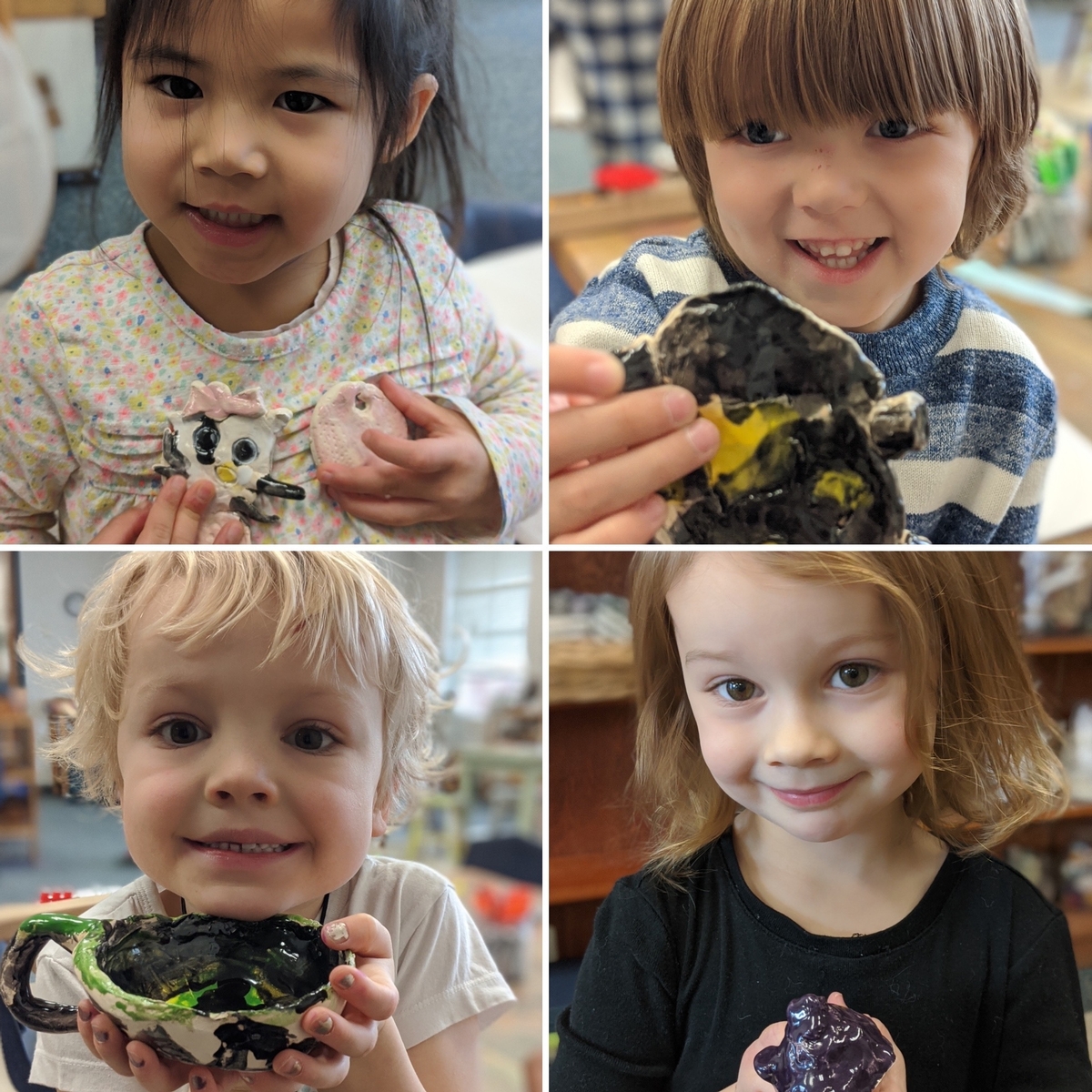 Natural gray clay is a material that we bring out every other year and it’s one of the few materials that we invite every child to experiment with. In our Clay Project this year, Early Learners were introduced to clay and started by exploring how it feels, what happens when you squeeze it, and how to change its shape and form. Experimentation of clay looked like smoothing, shaping, poking, rolling and cutting their clay with a myriad of tools.

Early Learners discovered what kinds of materials are available besides our hands as clay tools. Some Early Learners were interested in using the tool for a specific purpose of adding a detail while others just wanted to see what would happen with the tool.

After exploring clay, Early Learners started to sculpt their clay into visual representations as well as their own original designs. Some Early Learners knew exactly what they wanted to create. They used models or pictures as references for their pieces. Other Early Learners were interested in texture and the transformation of the clay by using a tool and their pieces are more abstract.

After finishing their designs, we glazed and fired the pieces. Early Learners got to experience the scientific process of how clay changes after being fired. Finished pieces included Darth Vadar, R2D2, a firetruck, bowls, cups, and various animals. We value the intimate and personal process of natural clay and it’s exciting to see Early Learners use the language of clay as means to communicate their ideas in the visual arts!

Make Sure You Receive Our Communications

How to add Foothills School to your safe sender list:

In order to ensure that our emails make it to your inbox, please add our From: address to your safe sender list or follow the instructions below for the email system you use.

If you use a provider that isn't listed here, please Google for instructions. 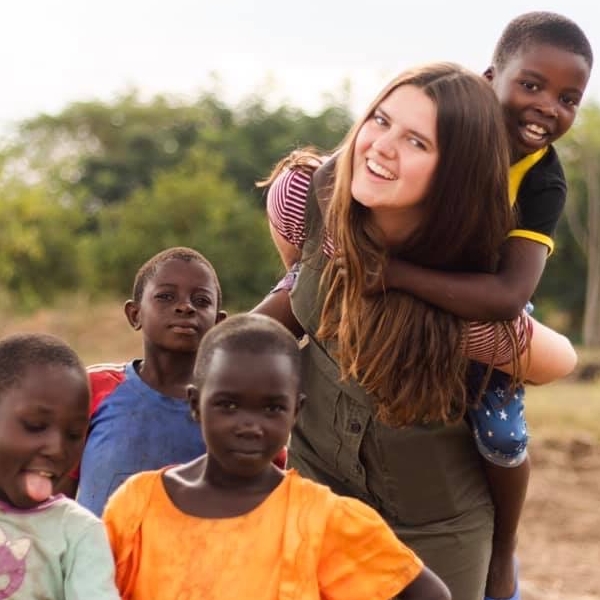 What does a real FSAS veteran look like?  In September, we had the privilege of welcoming back, Brooklyn Williams, a former Foothills graduate and current student at BYU. Brooklyn is the daughter of our own maestra Emily Williams and Aaron Williams as well as the sister to Lucas, in the Jr. High.  After she spoke to the Jr. High, Brooklyn agreed to come and share her service/education experience from this summer with the 5/6 class. Brooklyn's interest in human health and International relations was well suited to a summer-long program in Malawi, southeast Africa. Through an established institute (SAFI), Brooklyn spent the summer researching nutrition intake and levels, food availability/preference, and agricultural practices among indigenous people in central Malawi.  Her interactions with her colleagues/institute staff, as well as the local people, was rich and deep. The impact on her was clearly profound and joyful to boot. It's not hard to imagine the reciprocal effect she had on those with whom she interacted.  In between researching, Brooklyn also took advantage of opportunities to travel with fellow students to neighboring Zimbabwe - to see Victoria Falls and Tanzania's capital Dares Salaam where she skiffed over to Zanzibar.

Two takeaways stand out. First and most obvious is the person whom Brooklyn continues to become. Those parts of her we observed through her Foothills tenure now fully bloomed and in some cases - newly minted and amazing. This is a person who not only cares deeply about the world in which she's a part, but she has a passion to better understand all its machinations and goings-on. She is curious. Compassionate. She is highly collaborative. She has integrity and so clearly wants to make a difference to anyone observing.  And Brooklyn is not alone. Privilege aside, we have several graduates out there following unique and varied, and just as rich and meaningful experiences. The second takeaway was the response of our students in Brooklyn's presence. Respectful. Attentive. Curious. Sympathetic with many of the subjects while celebratory of the beautiful cultural aspects Brooklyn shared from her time there. Our students were engaged. And hungry to learn more. Their questions ran the gambit from pre-adolescent gimmes to sophisticated queries prompting Brooklyn to acknowledge, "...better than the Jr. High!" (developmental slack allowed).  She shared for a solid 80-90 minutes and the 5/6s gave their all in that time. Super!

If we can be modest and suggest part of Brooklyn's evolution stems from her Foothills experience - as well as her wonderfully encompassing family environment - then we are doing something right. 80's pop-culture references aside, Brooklyn's visit was a slam-dunk part of the 'christening' of our new home, and - the future looks bright.

A few words from Brooklyn about her time at Foothills.

“My years at Foothills prepared me to look at my schooling from a holistic perspective. Through project-based learning, I became comfortable with incorporating multiple subjects into one cohesive idea or project. This is useful while taking many classes in college. Whether or not my classes directly relate to each other, I have been able to bridge gaps of information in one class, because of something I learned in another. In addition to this, Foothills always encouraged my curiosity for topics that I was interested in. This gave me a better idea of what I was passionate about and wanted to study."

I felt confident and accomplished in my abilities because my Foothills classes tackled such rigorous topics for our grade level. This academic confidence has continued throughout the rest of my life. I know that if I put in the work, and ask for support when needed, that I can be successful."

“There are so many amazing teachers at Foothills… I loved the close-knit community that Foothills provided. Not only did I feel supported by my peers and classmates, but to this day I still feel a strong love and encouragement from every teacher that I had during my time at Foothills. Because of these student-teacher bonds, I felt comfortable asking my Nines teachers for letters of recommendation while I was submitting college applications.”

A Decade of Friendship 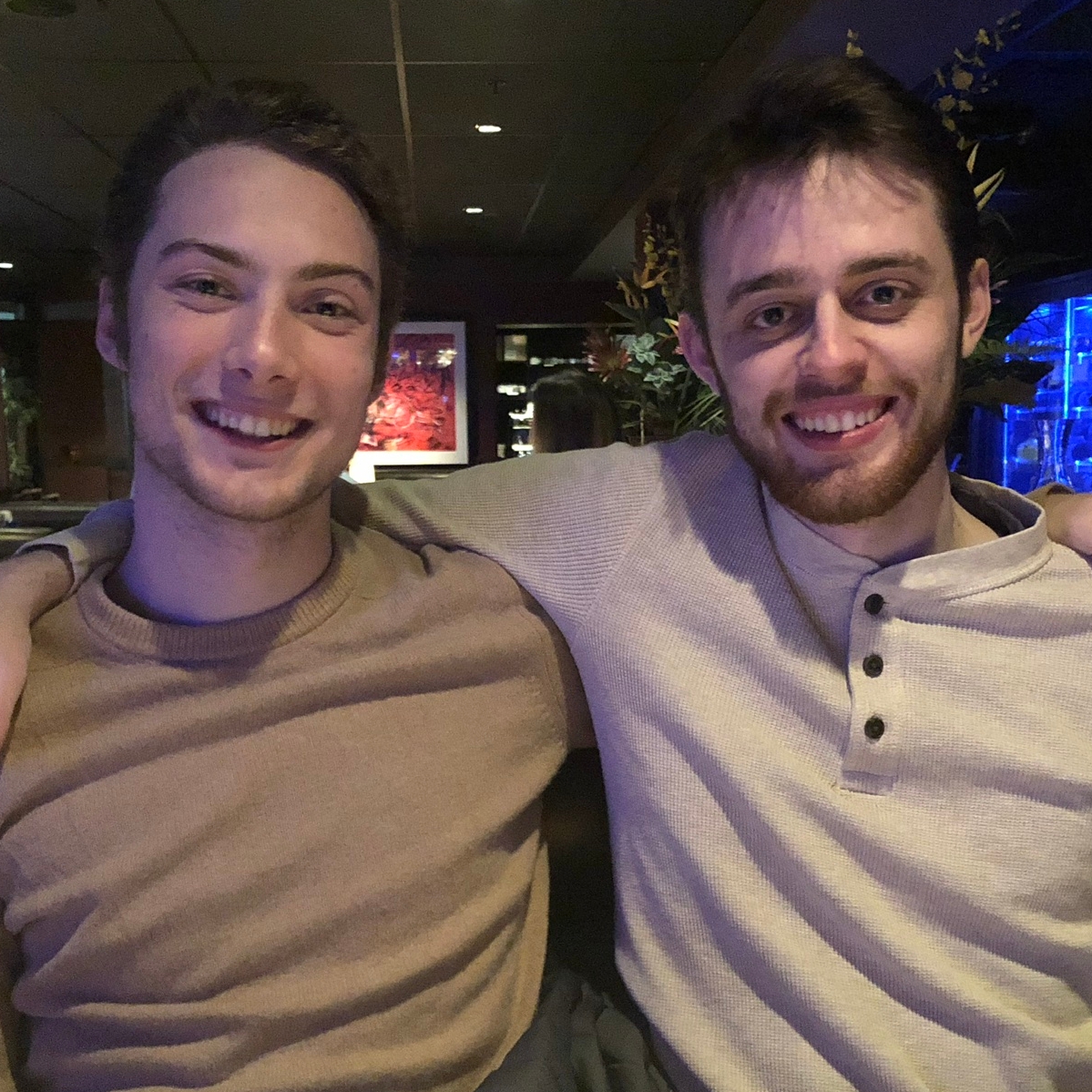 Matt first walked through Foothills’ doors as a Kindergarten student in 2001 and graduated from 9th grade in 2012. He recently returned to Boise after graduating from Westminster College last spring. Currently working in software development at Clearwater Analytics, Matt credits Foothills for nurturing the problem-solving skills and creative and innovative thinking his current job demands.

“At Foothills, I learned how to be skeptical; not to accept a given solution at face value, to find an answer for myself and to be an inquisitive and independent thinker.  I had such an advantage with this ability throughout high school, college and into my professional career.  I am grateful for the thirst for knowledge that this has provided me and the opportunity to have an autonomous view of the rest of the world, especially in an age when inaccurate information has such wide reach.”

In addition to a Foothills trip to Venice, Italy where he spent his 12th birthday riding in a gondola, many of Matt’s favorite memories from his time at Foothills include the friends he made.

“The friends I made at Foothills are some of the smartest, most creative, and most passionate people that I have met and to this day remain the greatest friendships that I have.  They are always pushing me to be better and supportive of whatever I choose to do.  They are truly genuine people who I am always excited to spend time with.  Through high school, they were great resources to help acclimate to the transition and my close friends were who I spent the most time with. I have no doubt that I have made several life-long friendships at Foothills.”

Matt met Billy in 8th grade when the two struck up a friendship. Their adventures together began with going out to lunch on Fridays in downtown Boise to more recently meeting in Spain to travel while Billy was studying abroad. 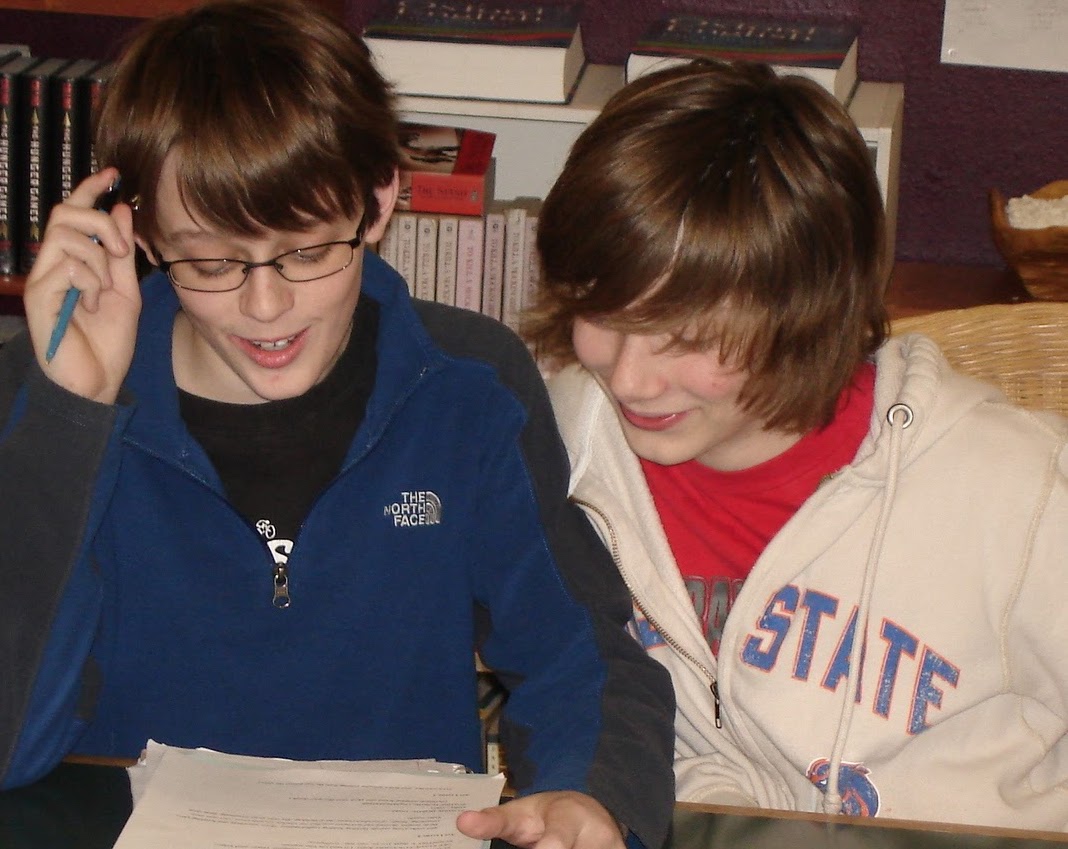 Billy, who also returned to Boise after graduating from college last spring, recently earned his TEFL (Teaching English as a Foreign Language) certification and has plans to go abroad shortly to teach. In the meantime, he has been acting in local productions and commercials—you may have seen him and fellow Foothills alumna Lily Yasuda in the Idaho Lotto commercial over the holidays—and he has been assisting Leah Clark with teaching dance at Foothills.

“The college I attended in Vermont [Bennington College] is founded on similar principles as Foothills— placing individuality, teacher-student relationships, and project-based learning at the forefront. Foothills was the first place that taught me to learn by following my interests. A principle that has since guided basically all my pursuits… my degrees are in Computer Science, Video Production, Spanish, and Dance.”

When asked what he valued most about his time at Foothills, Billy replied “I would say the relationships I made with my teachers. There isn’t anywhere else I feel more welcome returning.”